On Monday 8th February Muswell Hill Synagogue hosted it's annual Holocaust Memorial Event, giving local students the opportunity to hear direct testimony from a survivor. In the current political climate, with far right parties gaining ground in mainland Europe, it’s especially important to mark the liberation of Europe from Nazism and reflect on the millions of lives lost.

This year, Year 9 students from Fortismere School were privileged to hear Auschwitz survivor Victor Greenberg recount tales of his early years in war-torn Slovakia and his harrowing experiences in three concentration camps. He was liberated by the Americans and moved to the UK in 1946.

Despite losing all his family, with the exception of one sister, Victor's message is one of tolerance and hope. He connected so well with students and young people, inspiring them to combat injustice and fulfil their ambitions.

The event was organized by a team of volunteers from Muswell Hill Synagogue (chiefly Tamara Broido, Helen Style, Ruth Jampel and Gloria Morgan). Ruth Jampel welcomed the students and contextualized the events leading up to the Holocaust. Victor then mesmerised 240 students with his tale of survival and message of tolerance. Clive Lawton OBE then rounded off the morning by encouraging the students to reflect on Victor’s words and, above all, urged them not to be bystanders but to combat hate and intolerance wherever they find it. 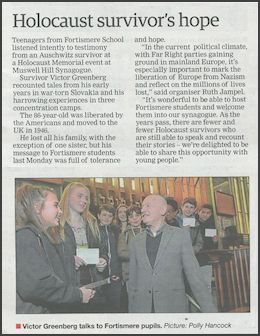 "Thank you so much for organising the Holocaust event for us yesterday. I got some really positive feedback from the students when I returned to school – they really enjoyed it."

The students were asked to write a few words about Victor, immediately after hearing him speak. "Victor is a legend" wrote some, "Victor has taught me to overcome obstacles and not dwell on them" wrote another.

Ruth Jampel says : "It’s wonderful to be able to host Fortismere students and welcome them into our synagogue. As the years pass there are fewer and fewer Holocaust survivors still able to speak and recount their stories – we’re delighted to be able to share this opportunity with young people"